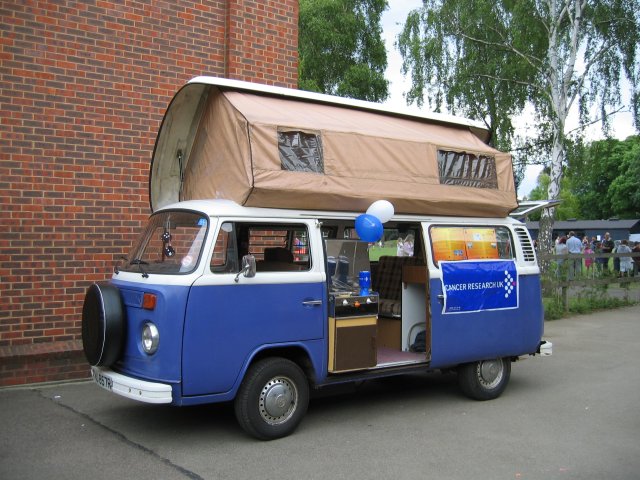 The threat of rain did nothing to dampen the enthusiasm of the crowds that had gathered for Bedford Prep School‘s Summer Extravaganza. This annual event is the time when all the pupils at the school get the chance to conceive and construct their own stands and stalls offering games, baked treats, activities and challenges, with all the proceeds going to the school’s own nominated charities that year.

Pursued by excited shouts of “It’s Squiffy!” from some of the boys who must have been paying attention during my presentation earlier in the week, I gently eased our expedition van through the mingling punters and parked her up underneath the School’s climbing wall.

Opening the van and raising the roof, I spent a very rewarding few hours explaining about the expedition to boys and their parents, answering people’s questions and demonstrating the marvels of Squiffy’s rock-and-roll bed.

Special mention must be made of ten year old George, who bounded into the van at the first opportunity and listened intently to my early guided tours. Once he had satisfied himself that he was sufficiently briefed on the details of the both the van and the expedition, he politely reassured me that I could safely chat to boys and parents outside the van while he conducted tours and expertly answered people’s questions from within. I have to pay tribute also to his sterling work with the Cancer Research UK charity tin, as I’m sure that he was personally responsible for the vast majority of the donations received that day!

Thanks to the generosity of the boys and their parents, a further 37 pounds and 73 pence was raised for Cancer Research UK which was wonderful, especially considering that the boys’ own stalls and exhibits at the Extravaganza were all raising money for the School’s own nominated charities.

Thanks to everyone who came to look at Squiffy and offered words of encouragement and support. Thanks to all the boys who climbed up to have a look inside, and to everyone who gave something for CRUK. My only regret was that due to the interest in Squiffy I didn’t manage to get a chance to have a proper look around at the Extravaganza, although I did see what looked like an ingenious hamster racing course on display which had drawn a large crowd of cheering punters. I have fond memories of the times when it was my friends and I who were painstakingly constructing and dutifully manning the stalls arranged around the school’s playing fields.

To wrap up, I just wanted to offer some words of reassurance to the lad who sat open-mouthed in Squiffy, staring all around him and asked me “How will you manage without a telly?” We’ll cope, I promise!

This site uses Akismet to reduce spam. Learn how your comment data is processed.