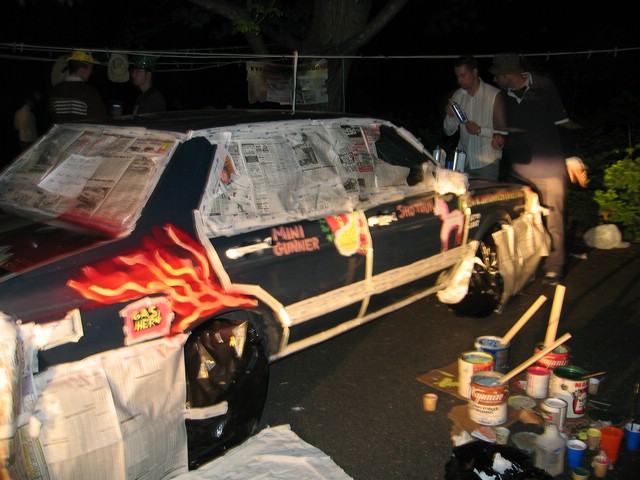 London2Sydney fever hit the USA on Saturday when my venerable 1988 VW Fox which has served me so faithfully during my time in America got treated to a rather unique paint job!

To mark the occasion of me and my house-mate’s departure from these shores, friend and work colleague Chris’ birthday and because, as everyone knows, any day is a good day for a party, a large and merry band assembled at our house in Princeton, New Jersey.

A gloriously sunny afternoon set the scene for a fantastic afternoon. And against a backdrop of a sizzling BBQ, a well-stocked bar and games of volleyball and horseshoes partygoers vented their creative spleens all over my car and helped London2Sydney raise even more money for Cancer Research UK!

In exchange for a donation to CRUK, keen punters got the chance to grab paint-brush and spray-can and adorn the long suffering car with whatever designs they fancied, leading to some interesting results!

As the evening drew in, the throng assembled inside our house to be treated to some outstanding musical performances by several of our friends, many of whom had travelled many miles to be there. Big shouts out to Ras Ujimma and the Black Circle Symphony (Wahkiba, Melshawn, Isaac & Israel) playing their congas, Daniel (saxophone), Misha (guitar), Anna Marie (vocals), Rick (guitar), Olivier (guitar) for making it a truly special evening.

Even with all the instruments packed away, the music and dancing went on and the party continued well into the small hours!

Thanks to the generosity, enthusiasm and general keenness of everyone at the event, $237 was raised and, as with all the money we’re raising for charity, every cent of it is going directly to Cancer Research UK! A big thank you to everyone who contributed!

Despite my excitement at the thought of being back in the UK in less than a fortnight now and being able to spend the next two months concentrating on the expedition preparations, I’ve got to say that it’s not going to be easy to leave such a great bunch of friends. Thankfully, the memories of all the events we’ve had like this one will take a long time to fade.

But meanwhile, the expedition planning continues apace and with plenty of work for Nick and I still to do, the next couple of months promise to be busier than ever!

This site uses Akismet to reduce spam. Learn how your comment data is processed.